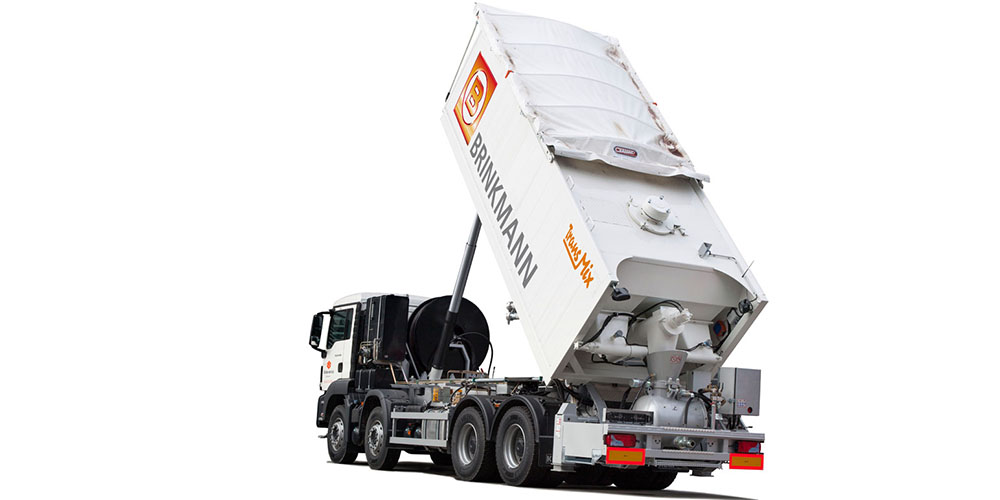 The TransMix 5500 8x4 is the compact and lightweight version, installed on a 4-axle chassis.

The Trans Mix 5500 8x4 is a fully automatic mixing and conveying system for conventional screed, which significantly reduces the costs for personnel and materials, as well as the general logistics costs such as tooling times and material losses. The material quality is also improved considerably and the processing time is reduced.

The TransMix systems have everything on board that is needed to manufacture screed. The division of the basin into 4 chambers for the various materials is a fundamental characteristic and is designed depending on customer requirements.

The basin is tilted upwards on the construction site using hydraulics, whereby the aggregates and binding agent automatically reach a metering screw. The additive is added using a metering pump. Using these internal conveying systems all materials are transported to the rear of the machine where the quantities of the mixture are precisely metered as standard volumetrically, i.e. after a number of revolutions of the auger, or optionally using an integrated weighing device.

The precisely metered material is conveyed to the mixer and the amount of water required is automatically added. In the pressure tank of the TransMix 5500 8x4 the screed is mixed and then pumped to the placement site.

The high-performance pneumatic conveyor at the rear of the TransMix 5500 conveys material up to a grain size of 16 mm to the placement site.

The TransMix is driven via the power pack which sits directly behind the driver's cab. It contains the drive motor, fuel tank, alternator, variable displacement pump and hose drum. The operation is effected via a central control cabinet which is mounted at the rear. The exact mixing ratio can be entered via the control system and recurring "formulas" stored.

The TransMix 5500 8x4 is the compact and lightweight version, installed on a 4-axle chassis. Depending on the version, the overall length is reduced by up to 3 m and is mainly used in the urban environment where less floor space is available.